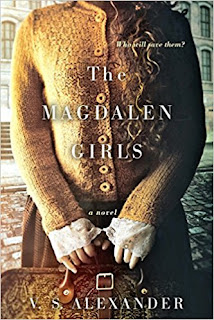 A historical fiction novel based on the Magdalene Asylums in Ireland which were institutions from the 18th to the late 20th centuries to house women believed to be prostitutes, unwed mothers, indigent girls and girls believed to be immoral. The story of sixteen-year-old Teagan, set in Dublin in 1962, brings to light the cruel and inhumane conditions in which she and others like her lived and worked. Her alcoholic father in the middle of the night delivers Teagen to the gated community of The Sisters of the Holy Redemption because a parish priest has confessed that her presence causes impure thoughts in him. Her parents disown her and deny her very existence from this day forward. Teagen befriends Nora and they make plans to escape the drudgery of their work assignment in the laundry. Dressed in uniforms, shorn hair and with new names, Teagen and Nora are cut off from the outside world, families, and life, as they knew it. The other women who sleep in their dormitory like bedroom seems to have been beaten down and indifferent to their need to escape. Both girls befriend Lisa; an unassuming girl who prays constantly, whose job it is to copy The Book of Kells onto parchment as a gift to the convent. This unlikely trio forms a friendship, which helps them survive their day-to-day indignities, however, ends in tragedy.

I found the premise of the story fascinating and couldn't help researching the Magdalen girls (named after Mary Magdalene) to find out more about them. (See links below) Prior to this story, I knew nothing about this blight on the history of women in the Catholic Church. The fact that these asylums/prisons/laundries existed in other countries as well as the United States and that the last one closed in Ireland in 1996 is incomprehensible to me. Alexander has written a sympathetic story, one that reads as if it were highlighting a time in the dark ages. I suspect that as horrific as this story is, it doesn't begin to scratch the surface of what was done to these women in the name of love and redemption. While I was fascinated and appalled by the incidents in this book, I felt that it lacked depth of character and plot. As my family historian of Irish descent, it has made me want to read more books on this subject and investigate if there are records as to which women were institutionalized. I finished it and keep talking to myself about how women can be abused in the name of love by their families, nuns, and the Catholic Church.

I recommend this book to those who enjoy historical fiction and like to read about women's issues in the Catholic Church.


For more information on the Magdalen girls:
Seeking Redress for a Mother's Life in a Workhouse
Magdalene Asylum
A Blot on Ireland's Past
Report of the Inter-Departmental Committee to establish the facts of State involvement with the Magdalen Laundries

V.S. Alexander is an ardent student of history with a strong interest in music and the visual arts. V. S. lives in Florida and is at work on a second historical novel for Kensington.
#magdalengirls #irelandfiction #womeninthecatholicchurch
Posted by Kathy Nester at Saturday, March 17, 2018 No comments: 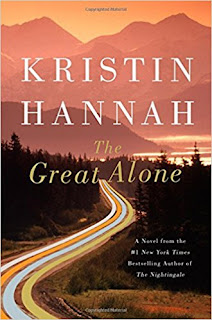 Ernt Allbright returns from the Vietnam War a broken man. A prisoner of war, he is a volatile man who can't seem to hold a job. When he loses yet another job and inherits property in Alaska, Ernt decides that a fresh start is just what he and his family needs.

Ernt, his wife Cora and 13 year old, Leni are ill-prepared for the hardships of the Alaskan frontier. Moving to a remote part of the state in a cabin without running water surrounded by wildlife and darkness does not relieve Leni's anxiety about her father's stability. Their nearest neighbors are survivalists preparing for Armageddon and help fuel Ernt's paranoia and insecurity. He takes out his frustration by beating Cora for imagined offenses.  Leni's escape from the endless daily chores and her father's wrath is attending school. There she makes her first true friend, Matthew. When the darkness of winter descends, the Albright’s are soon at the mercy of the townspeople and their generosity.

Hannah builds the tension in this story page by page. The reader knows something bad is coming, but not quite sure where the threat is coming from, who is the enemy?  I love how she writes and unfolds the drama to the point where I didn't want to put the book down but didn't want to find out what Ernt would do next. I found myself holding my breath and disappointed when once again Cora takes him back and refuses to press charges. Hannah has crafted a plot that is complex and takes on the uncomfortable subjects of PTSD, family violence, and spousal abuse. This unforgettable tale is also an emotional story of forgiveness, first love, and friendship. A must read, but you will need tissues for this one.

Kristin Hannah is the New York Times bestselling author of more than twenty novels. A former lawyer turned writer, she is the mother of one son and lives with her husband in the Pacific Northwest.