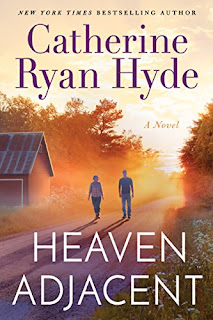 There are some days when everything is going wrong and we each question our purpose in life. Roseanna Chaldecott is a high-powered lawyer in Manhatten when Alice, her law partner, and best friend, drops dead in the middle of a meeting. Roseanna gets in her car one day and decides to keep driving, out of the city and out of her life. She runs out of gas and happens upon a neglected farm that seems perfect for her new life. Considering her current state of mind, perhaps Roseanna should have investigated the barn and the other building on the property. Unexpected developments threaten her peace of mind and solitude. Leaving behind all of her responsibilities in the law firm, Roseanna soon realizes that "heaven" comes with a price.

Hyde writes books that always makes me hopeful about the inherent goodness in people. Her interest in "paying it forward" shines clearly in her novels. It is such a warm, thought-provoking story, that I didn't want it to end. Her relationship with her son is complicated as it often is in families, however, it rings true. There are many humorous situations and I especially enjoyed Ernest, the orphan horse.

Add this novel to the top of your Summer Reading List, grab a glass of wine, and escape for awhile.

I received an ARC ecopy from NetGalley for a review.

Other books by Catherine Ryan Hyde:

Catherine Ryan Hyde is the author of thirty-three published books. Her bestselling 1999 novel, Pay It Forward, adapted into a major Warner Bros. motion picture, made the American Library Association’s Best Books for Young Adults list and was translated into more than two dozen languages for distribution in more than thirty countries. Her novels Becoming Chloe and Jumpstart the World were included on the ALA’s Rainbow List; Jumpstart the World was also a finalist for two Lambda Literary Awards and won Rainbow Awards in two categories. The Language of Hoofbeats won a Rainbow Award. More than fifty of her short stories have been published in many journals, including the Antioch Review, Michigan Quarterly Review, the Virginia Quarterly Review, Ploughshares, Glimmer Train, and the Sun, and in the anthologies Santa Barbara Stories and California Shorts, as well as the bestselling anthology Dog Is My Co-Pilot. Her short fiction received honorable mention in the Raymond Carver Short Story Contest, a second-place win for the Tobias Wolff Award, and nominations for Best American Short Stories, the O. Henry Award, and the Pushcart Prize. Three have also been cited in Best American Short Stories.

Hyde is the founder and former president of the Pay It Forward Foundation. An avid equestrian, photographer, and traveler, she lives in California.
Posted by Kathy Nester at Monday, May 28, 2018 No comments: 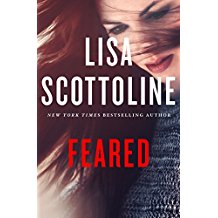 In this latest thriller, Nick Machiavelli returns to sue the Rosato & DiNunzio law firm for reverse sex discrimination—claiming that three applicants were not hired because they were men. Their lone male employee, john Foxman, makes matters worse when he admits that he is looking for another position because he doesn't believe he will make partner as a male in an all-woman firm. Bennie and Mary feel betrayed when John admits he may have expressed his feelings during job interviews with competing law firms. Machiavelli has always been out to get Mary and even though she is pregnant, she and her law firm are in his sights. He will stop at nothing to bring Rosato & DiNunzio down, but murder? Mary is determined to show him for what he is even if it means including Flavia, his mother, and the Rosary Society.

I always enjoy a Scottoline book, but this is the best Rosato & DiNunzio book so far. No spoilers here, I won't divulge whether Mary and Anthony have a boy or girl. Scottoline has the Italian/South Philly experience at its best...I was laughing out loud at some of the dialogue between "Mare" and the ladies from the Rosary Society, practically smelling the chocolate chip cookies and baked ziti. I finished this book in two days because I couldn't wait to see what happens next. I worried right along with Mary when she couldn't feel the baby move and breathed a sigh of relief when all was well.
Add this one to your list to read this summer and in the meantime, read the previous five books in the series.

Other books in the Rosato & DiNunzio series:

Lisa Scottoline is a New York Times bestselling and Edgar Award-winning author of twenty-eight novels. She has 30 million copies of her books in print in the United States, she has been published in thirty-five countries, and her thrillers have been optioned for television and film. Lisa also writes a weekly column with her daughter, Francesca Serritella, for The Philadelphia Inquirer, and those stories have been adapted into a series of bestselling memoirs, the first of which is entitled Why My Third Husband Will Be A Dog. Lisa lives on a Pennsylvania farm with an array of disobedient pets. Visit Lisa at www.Scottoline.com, or follow her on Facebook, Twitter, or Instagram @LisaScottoline. 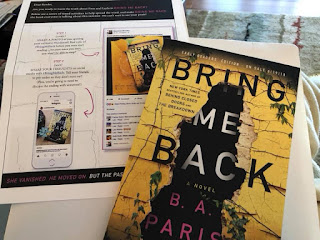 Finn and Layla are returning from a ski vacation in Megeve when his girlfriend, Layla disappears. Finn stops for a restroom break about an hour and a half from Paris and leaves Layla sleeping in the car at the Rest Stop. After reporting her missing and an extensive search, Finn moves on with his life. As the boyfriend, Finn is suspected in her disappearance and repeats his story, claiming his innocence for the next 12 years. The one person who believes him is Ellen, Layla's sister. When Ellen and a former neighbor claim that they have recently seen Layla, Finn begins to question if Layla has been living in hiding and has returned. Is Layla alive or is someone determined to make Finn and Ellen believe that she is?

I loved the two previous books written by Paris. I couldn't wait to start this one...from the very beginning I was drawn into the story and questioned Finn's version of Layla's disappearance. However, there was something about the characterization of Finn that didn't seem realistic, I initially thought he was a "she." I enjoyed how the suspense built throughout the book, though slow and repetitive at times. Knowing her penchant for twists and turns, I was prepared for a surprise and unexpected ending. And it was complicated, convoluted, and satisfying! If you are a Paris or psychological thriller fan, you won't want to miss this one.


I received a copy for a review.

Other books by B.A. Paris

B.A. Paris is the internationally bestselling author of Behind Closed Doors and The Break Down. She grew up in England but has spent most of her adult life in France. She has worked both in finance and as a teacher and has five daughters. 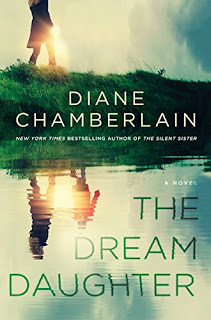 It's April 1965 and Carly Grant is a student intern at a private rehabilitation center when she agrees to work with a difficult patient who claims to have fallen accidentally from a three-story building. Hunter Poole is characterized as "unmotivated, a clinically depressed suicide risk", but for some reason, he wants to work with Carly. She agrees and sets in motion a series of events that neither one of them could have predicted. Fast forward to April 1970, Carly is twenty-four weeks pregnant and an ultrasound has shown that her baby has a heart condition that is fatal. Carly despairs until her physicist brother-in-law suggests a course of treatment that is unbelievable and dangerous. To what lengths will a mother go to save her baby?

Chamberlain has written a story that will leave your head spinning and your heart in your mouth! Fast-paced, a remarkable plot that stretches credibility and at the same time had me hoping that it is possible. I don't want to give anything away, but I highly recommend this book. I love Chamberlain as an author and as someone who reads many books, it is difficult to come up with a plot that is fresh, new and exciting to me.  I recommend it as a Book Club choice, there are many discussion topics: in vitro heart surgery, health and infant intensive care advancements, faith, hope and a mother's love.

Other books by Diane Chamberlain:

The Stolen Marriage
Pretending to Dance

Diane Chamberlain is the New York Times, USA Today and Sunday Times bestselling author of 25 novels published in more than twenty languages. Influenced by her former career as a social worker and psychotherapist, she writes suspenseful stories that touch both heart and mind.