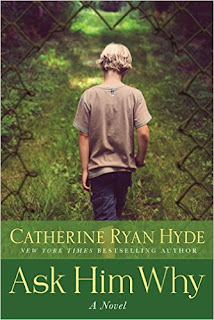 It took 10 and half years for his sister or anyone to ask Joseph why he refused to go out on duty that night in Baghdad. The story begins when Joseph unexpectedly arrives home three and a half months after he was shipped overseas to fight. Ruth discovers a yellow cab parked in front of her house and her father home from work in the middle of the day talking to her brother and mother in the living room. Little did Ruth know that her life as she knew it was going to change dramatically and the decisions made in the next few days would affect her family for the next 10 years. Her younger brother, Aubrey, idolizes Joseph and becomes bitter when Joseph is labeled a coward and a murderer.

Through newspaper articles and the Internet, Ruth and Aubrey soon discover there is a lot about their older brother that they don't know and it becomes apparent that maybe they never knew him at all. Their family is not one to ask questions or to discuss feeling or events, but surely they would have known if their brother spent his summers elsewhere. Who is Hamish MacCallum and why does Joseph refer to him as "more of a father to him than his biological father or his adopted father?"

Hyde does not shrink from tough subjects and the long lasting effects on a family. The economic impact of Joseph's decision devastates his father and his family's standing in the community. Once started, this book is very difficult to put down, Hyde is masterful in telling her story alternating in the voices of Ruth and Aubrey and the choices they make to cope during this difficult time.  There are many aspects to this story that would make it a good Book Club pick, I found myself wondering who I would be in this story. If I have my choice, I want to be Hamish. Definitely, a worthwhile read and discussion book. I can't wait to see what Hyde writes next.

I received an Advanced Reader's Copy from BookSparks to review.

Hyde is the bestselling author of twenty-seven published and forthcoming book. Her bestselling 1999 novel Pay It Forward was adapted into a major motion picture.