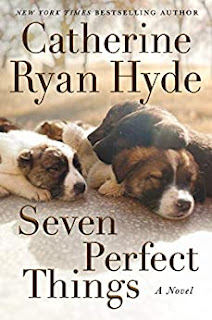 Thirteen-year-old Abby Hubble is out walking when she sees a man throw a sack into the river. When the sack starts moving, Abby feels that she has no choice but to dive into the river. Imagine her surprise when seven puppies wriggle out of the sack Taking them to the pound seems her only option until she finds out what the future holds for them. Taking the puppies home is out of the question; her father already makes life miserable for her and her mother. Abby remembers a cabin in the woods where she may be able to keep them and visit them daily. Elliot Colvin has lost his wife and the purpose for his life when he crosses paths with Abby and the puppies at his cabin. That chance encounter gives them both the hope that they had lost.

Hyde's strength in her writing is her message of love and the belief in the goodness of people. The subject matter is not always an easy one, in this case abuse, however, Abby and Elliot find each other at the exact time that they are needed. Hyde brings humor and lightness through the antics of seven puppies and the lengths to which Abby hides caring for them.

Seven Perfect Things is a heart-warming book filled with the joy of new beginnings and courage found in unexpected places.

Other Hyde books reviewed by me:

My Name is Anton

Have You Seen Luis Velez?
Just After Midnight
Heaven Adjacent
The Wake Up
Allie and Bea
Say Goodbye For Now
Ask Him Why
Worthy

Catherine Ryan Hyde is the author of forty published and forthcoming books. An avid traveler, equestrian, and amateur photographer,  she shares her astrophotography with readers on her website.

Patterns by Jen hosts and designs the Yearly Color Challenges - this is my fourth year participating. The theme for this year is fruits and vegetables and all of the information and monthly patterns will be found on her blog. There are two choices for block size - 6 and 12 inches finished.

The themes for the previous years: 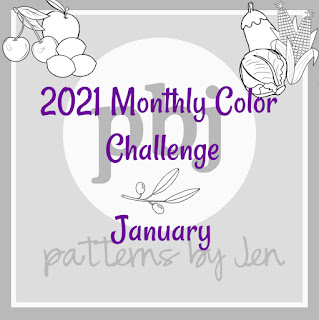 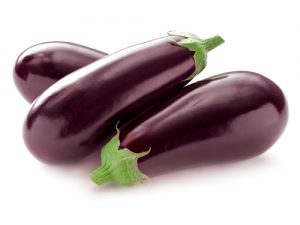 The benefits of eating eggplant - https://www.medicalnewstoday.com/articles/279359#benefits

25+ Recipes That Will Make You Fall in Love With Eggplant. - Eggplant isn't something that I eat, I may have to try some of these recipes.

I have decided to use fruits and vegetables fabric coordinating with each month. Some months may be a challenge, however, I will try to substitute a fruit or a vegetable of the same color.

On a whim, I stopped in a fabric store Obie's Country Store.

Look what I found, who would have thought? 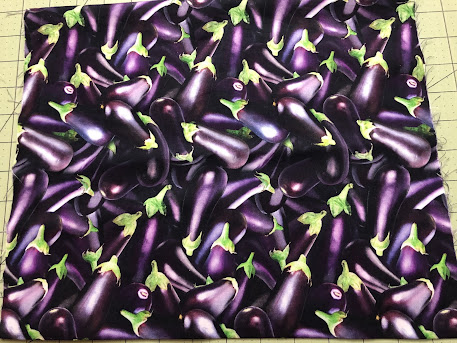 I am trying to use background fabric from my stash. I am auditioning these two - leaning towards the blue on the right. 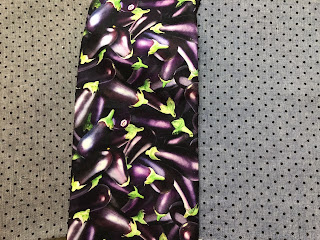 It's hard to tell if I like them, we'll see! 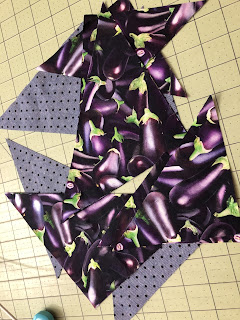 trim your blocks according to the pattern! 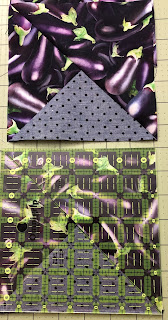 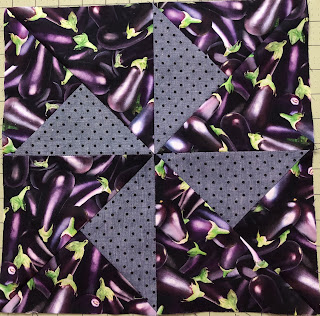 Everyone Deserves a Quilt

Join us on Facebook - Quilt and Learn with Patterns by Jen

Grateful - feeling or showing an appreciation of kindness; thankful. 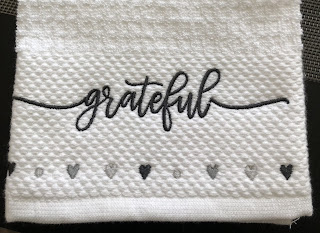 Each year I choose One Word to direct me in my outlook, accomplishments, communications, etc. For more information about One Word 365, check out - https://oneword365.com/#join-us I have been doing this activity since I retired from my career as a librarian. Some years are more successful than others.

2020 has been such an anxiety driven, isolating year that I have been especially careful in choosing My One Word for 2021. I tried to find "joy" in some fashion every day. Because of the pandemic, it was difficult to find joy in every day activities.

My One Word from past years:

Grateful and Thankful kept jumping out at me while contemplating my One Word and when I found these dishtowels, it seemed serendipitous. 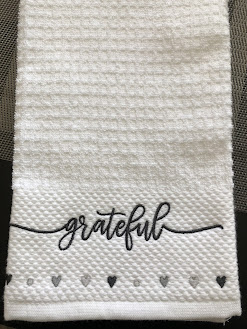 I am grateful that my family is healthy entering the New Year, my Grandson had Covid at Thanksgiving and has fully recovered. We are following CDC Guidelines; wearing masks, hand washing and socially distancing. No Christmas Eve celebrations and we socially distanced while opening Christmas presents. We have never gone out for New Year's Eve, so we won't miss those celebrations.

I love it when I choose my word and then I start seeing it everywhere. This pen was in a three pen set at Home Goods. 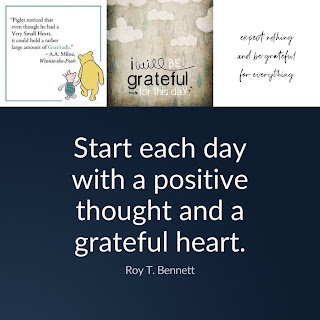 Posted by Kathy Nester at Thursday, December 31, 2020 No comments: 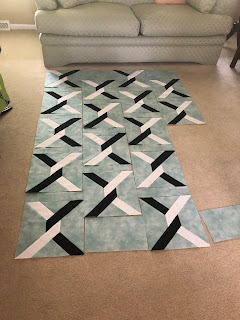 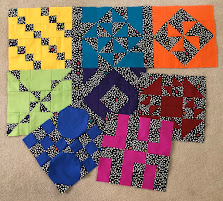 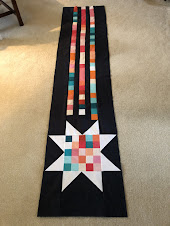 My Quilt Guild - Brandywine Valley Quilters Guild has issued a challenge to its members. 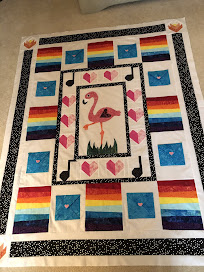 I'm ready! All of the patterns, fabric, etc. are in numbered plastic boxes.

This UFO activity will be a challenge because I have already committed to making "Wanda" starting in January. Wanda is a Gudrun Sew Along, info at GE Quilt Designs.

I am also a blogger for the 2021 Monthly Color Challenge, this is my 4th year doing this Challenge. Patterns by Jen designs and hosts the challenge each year. Her instructions are well-written, clear and the monthly project is a lot of fun! Join us at https://www.facebook.com/groups/259684534541789. Patterns will be posted at https://patternsbyjen.blogspot.com/2020/12/announcing-2021-monthly-color-challenge.html.

I will be blogging and posting throughout the year on my progress.

Posted by Kathy Nester at Wednesday, December 30, 2020 No comments: 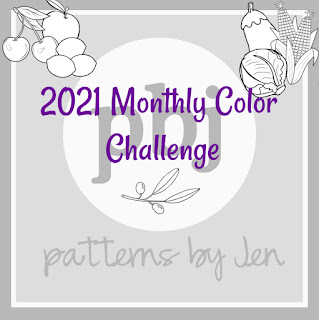 Patterns by Jen hosts and designs the Yearly Color Challenge - this is my fourth year participating. The theme for this year is fruits and vegetables and all of the information and monthly patterns (the first of the month) will be found on her blog. There are two choices for block size - 6 and 12 inches finished.

The themes for the previous years:

Some of the tools that are helpful during the challenge.

1. 12" x 12" Clear Scrapbook Case by Simply Tidy™- I love these cases for keeping all of the material and blocks together each month. I buy them at Michael's on sale - paid 2.99 recently.

3. Pins - I am a pinner to keep all seams aligned 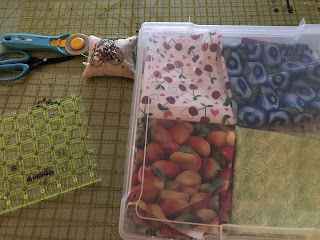 I had this crazy idea of using fruit and vegetable fabrics.You may use any fabric that you want - solids, prints, etc. Jen has a list of the months and their colors on her blog - https://patternsbyjen.blogspot.com/2020/12/announcing-2021-monthly-color-challenge.html 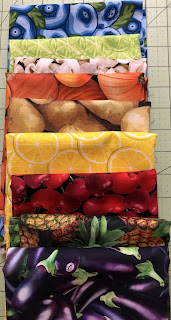 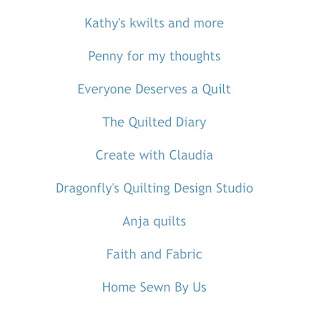 The sponsors for the 2021 Monthly Color Challenge. 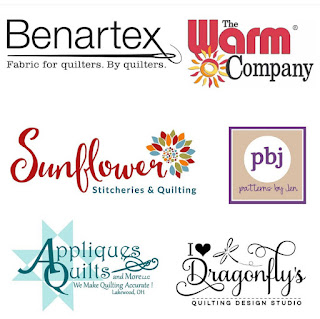 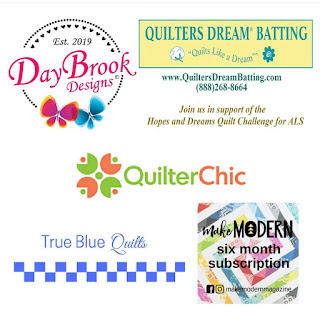 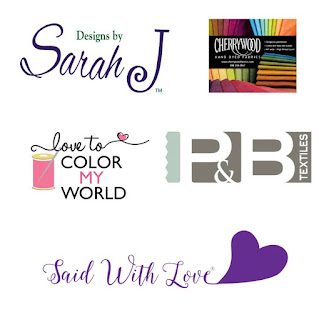 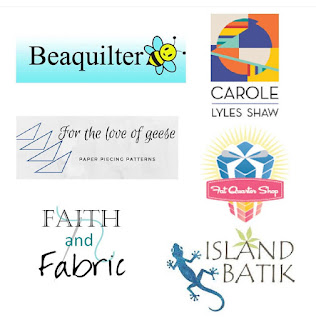 Posted by Kathy Nester at Wednesday, December 23, 2020 No comments: 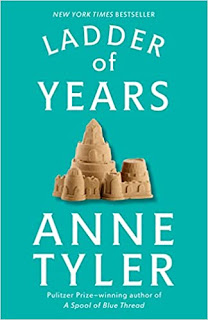 "Baltimore woman disappears during family vacation." Delia F. Grinstead, 40 years old, wife of a physician, mother to three and with her two sisters goes on a vacation with her family and doesn't return. There isn't one incident that is a tipping point, she walks away from the beach blanket in Bethany Beach and just keeps walking. Will anyone miss her, will they come looking for her, does anyone care?

I enjoyed Delia's story and could identify with some of her feelings. What mother doesn't feel unappreciated at some point in time and could just keep walking out the door and down the steps? With $500 of vacation money in her pocket and wearing her husband's beach robe, Delia didn't plan in advance and has no idea where she is going, however, she feels free and at peace. I read this book in a day and a half even though it has been hard to focus and enjoy reading. It's the week before Christmas in the middle of a pandemic, so anxiety is high. Some of the Amazon reviews of this book are not kind and suggest that Delia has nothing to complain about---her husband doesn't beat her, she's financially secure and has three healthy children. All true, but a chance encounter in the supermarket and her family's reaction to accusation against her, cause Delia to feel unimportant and taken for granted. Anne Tyler has captured those feelings and given a voice to many voices unheard. I enjoyed this book and grateful that it is a Book Club choice for the The Bee Keepers - The Book Hive Book Club. I once read a story about a woman who left her life behind by signing up to work on a cruise ship. That story like this one fascinated me.

No spoilers here, however, I would often wonder, what happens next? Is this what happens to missing people and do they ever just go home again?

ANNE TYLER was born in Minneapolis, Minnesota, in 1941 and grew up in Raleigh, North Carolina. She is the author of more than twenty novels. Her twentieth novel, A Spool of Blue Thread, was shortlisted for the Man Booker Prize in 2015. Her eleventh novel, Breathing Lessons, was awarded the Pulitzer Prize in 1989. She is a member of the American Academy of Arts and Letters. She lives in Baltimore, Maryland. For more information: https://annetyler.com

Posted by Kathy Nester at Friday, December 18, 2020 No comments:

Who is telling the truth?

placed on her by her family and forged a brilliant legal career. But her decisions

came at a high cost, and now, battling her own demons, she has exchanged

her high profile career for a job at a sexual assault center, helping victims who

When Jodie, a sixteen-year-old girl with facial deformities, accuses four boys in

her class of an unthinkable crime, the community is torn apart. After all, these four

face of public outcry. And as issues of sex, race and social justice collide, the most

explosive criminal trial of the year builds to a shocking conclusion."

This story started strong - Zara has re-evaluated her life as a high-end lawyer to make a difference and here is her chance; Jodie needs someone on her side and to believe her. The problem is that Jodie keeps changing details of her assault  and the events leading up to it, is Jodie embarrassed or lying about what happened the night of the party? About mid-way through the book, the story seemed to falter, Zara's problematic relationship with her family overshadows Jodie's issues. Jodie's disfigurement is cause for her to be victimized by bullies at school and Zara is shamed by the men in her family for not following cultural norms  and for her independent ways. The author's voice was not as strong as Jodie as it was as Zara. The character development of the boys and their families versus the accusations of the horrific assault will resonate with crime  victims as readers. It is difficult for me to identify or to understand the main characters, no one seems likable and all have self - destructive behaviors. No spoiler, however, I wish the ending was the beginning of the book and the starting point rather than the end.