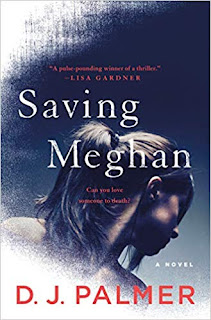 
A mother will do anything to find out what is wrong with her only daughter and to find treatment. Has Becky, Meghan's mother, gone too far in her quest to find what is causing Meghan's sickness, especially since her own husband doesn't believe her? Meghan has been in and out of hospitals and doctors wonder is this a case of Munchausen syndrome by proxy and who is to blame Becky or Carl? Fifteen-year-old Meghan has her own secrets and raises suspicion that she may be faking her illness to get her parents attention. When one of her doctors dies under suspicious circumstances, Becky's illness takes on a more ominous tone. The doctors take drastic action to keep Becky safe, is it enough? Becky's life depends on it.

A psychological thriller with a unique plot that will keep you guessing as to who is lying and what is really happening with Meghan. I love being swept into a book and reading it all in one sitting. Fans of B.A. Paris will enjoy reading Saving Meghan.


I received a paperback copy for a review.


D.J. Palmer is the author of numerous critically acclaimed suspense novels, including Delirious and Desperate. After receiving his master’s degree from Boston University, he spent a decade as an e-commerce pioneer before turning his attention to writing. He lives with his wife and two children in New Hampshire.

Have You Seen Luis Velez? 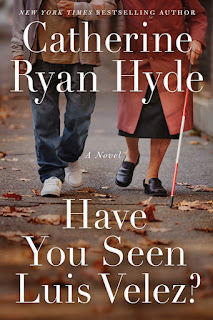 Raymond Jaffe feels like he doesn't belong; not in his mother's new family, not at his father's house every other weekend, not in school and now his only friend is moving away. When a woman downstairs in his building asks, "Have You Seen Luis Velez?" Raymond is drawn into the life of a ninety-two-year-old, blind woman named Mildred Gutermann. Millie and Raymond form a friendship that is beneficial to both of them and transcends their ages. Raymond takes it upon himself to try and find out what happened to Luis who came three times a week to help Millie for 4 years until one day Luis didn't show up.

Hyde's stories are always feel good ones for me. She provides hope in an otherwise crazy mixed up world. Being an animal lover, there is usually an animal, which is integral to the story, and in this case it is a feral cat. Luis feeds a cat in an abandoned building and takes it with him when neighborhood boys are looking for it to hurt it. While searching for Millie's Luis, Raymond encounters many who wish they had the time or the opportunity to help others.

This is one of those stories that stayed with me after I finished it. Hyde inspires me to be a better person and to help others. Add this book to your TBR list and you won't be disappointed.

She is founder and former president (2000–2009) of the Pay It Forward Foundation and still serves on its board of directors. As a professional public speaker, she has addressed the National Conference on Education, twice spoken at Cornell University, met with AmeriCorps members at the White House, and shared a dais with Bill Clinton. Visit her at www.catherineryanhyde.com. 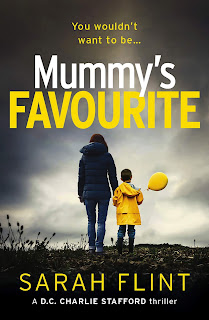 
This is the first of four in a new British police procedural series introducing DC Charlie Stafford who works in the Community Support Unit of the Metropolitan Police in London. Drawn into this psychological thriller from the very first page, Flint describes what it feels like under the floorboards, to be buried alive. Told in alternating voices, the victim, the killer and DC Stafford, the horror becomes all too real. The killer is abused by his mother as a child; he seeks to punish mothers who favor one child over another in the family. Initially thought to be a domestic abuse situation and after being assaulted by the husband, Charlie is determined to find the missing mother and son. As more victims are reported as missing, the case takes on a grizzly new focus.

Not for the faint of heart, Flint's police career has provided almost too difficult to read descriptions of unspeakable acts. Unfortunately, they are realistic. As a huge psychological thriller fan, Flint shows great promise in this series. With a touch of British humor, Charlie has a reputation for being in the right place and an uncanny ability to catch the bad guys. There are enough twists, turns, and subplots to keep me guessing as to the perpetrator. Add this series to your "must read" list. I look forward to reading book 2, The Trophy Taker.

With a Metropolitan Police career spanning 35 years Sarah Flint has spent her adulthood surrounded by victims, criminals and police officers. She continues to work and lives in London with her partner and has three older daughters.
Posted by Kathy Nester at Sunday, February 17, 2019 No comments: 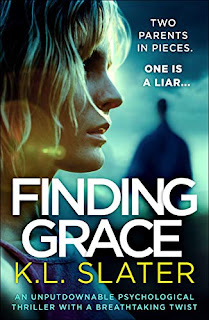 Lucie has the perfect life; a husband who tells her he loves her every day, two children - a boy and a girl, best friends, and good health. Her daughter, Grace, has turned 9 and declared her independence. She begs to walk home from her best friend's house; it's not far, just at the end of the road. Lucie caves and agrees when her overbearing mother-in-law disagrees. There is a bend in the road, but Lucie's misgivings are allayed when the two fathers agree to watch Grace unobtrusively from their respective houses. As often happens, one father receives a text, looks at his phone, and the other goes back into the house after he thinks Grace is at the bend. When Grace goes missing in those few seconds, it soon becomes apparent that everyone has something to hide including Grace's best friend Olivia.

Perfect psychological thriller for Valentine's Day. Slater has written a complex tale with multiple subplots, all of which add to the horror of the situation. Every parent can relate to Lucie and Blake's self-recrimination. I love it when I can't identify the "bad" guy and predict the ending. Fast-paced, it held my interest until the very end.

K. L. Slater -- After years of trying to get published and never getting further than the slush pile, I went back to university at the age of 40 where I gained a first-class honours degree in English & Creative Writing and an MA in Creative Writing with distinction. My first adult psychological thriller for Bookouture, ‘Safe with Me’,  actually started life as my dissertation on my English & Creative Writing degree in 2010. I am now a full-time writer. I have a daughter and two stepsons and live with my husband in Nottingham and Yorkshire. To learn more...https://klslaterauthor.com

Where the Crawdads Sing 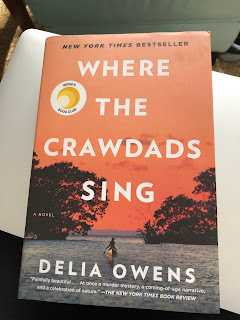 Owens has written a compelling story of Kya Clark, the Marsh Girl, living in the marshes surrounding Berkely Cove on the North Carolina coast. Far from an idyllic life, Kya lives in a shack with her Mother, Father, and siblings. Her father, a drunken brutal man, slowly drives everyone she loves away. Left on her own for long stretches of time while he goes on drunken binges, spending what little money he receives, Kya survives by selling mussels to Jumpin's Gas and Bait. Jumpin and his wife Mabel are the two constants in her life who look out for her and supply her with clothes, shoes, and necessities.
Left to her own devices Kya becomes one with the marsh and entertains herself by documenting the life around her. Always on the outside looking in, she hides when others come to the beach, especially the truant officer. Only attending school for one day, she is befriended by Tanner, who teaches her to read, only to leave her broken-hearted.
The townspeople eventually leave her alone, only to make up stories and myths about her.
Kya becomes the center of attention when she is accused of murdering the popular married man in town.

Owens has written a lyrical, well-written novel about isolation, love, abandonment, and friendship. While stretching credibility at times, it all fits together nicely into a bestselling novel. Somewhat resistant to reading bestselling novels, a friend loaned it to me, and once started I needed to discover who murdered Chase. I had my suspicions and was not disappointed at the ending.  I definitely recommend it and look forward to other Owens novels.

Delia Owens is the coauthor of three internationally bestselling nonfiction books about her life as a wildlife scientist in Africa. She has won the John Burroughs Award for Nature Writing and has been published in Nature, the African Journal of Ecology, and International Wildlife, among many others. She currently lives in Idaho and this is her first novel.
#wherethecrawdadssing

Posted by Kathy Nester at Saturday, February 02, 2019 No comments: 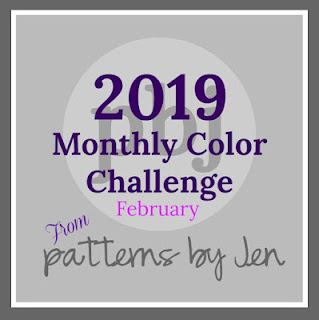 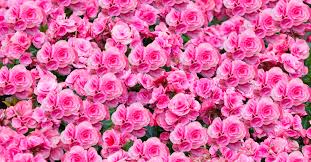 Some important information about the 2019 challenge:

Pink is the color for this month, perfect for Valentine's Day!

Jen provides some helpful hints for this month's block construction, make sure you read all of the instructions before cutting and sewing. I am a pinner and it really helped to get the points to line up. 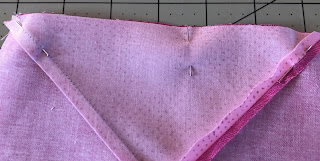 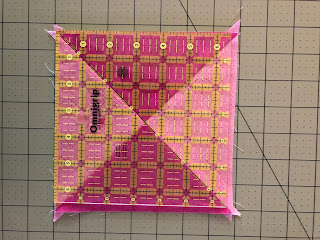 If you don't have a 6.5 inch square ruler in your toolkit, you may want to purchase one. Very helpful in squaring up the blocks. 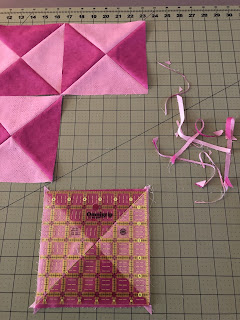 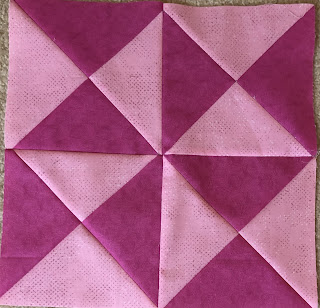 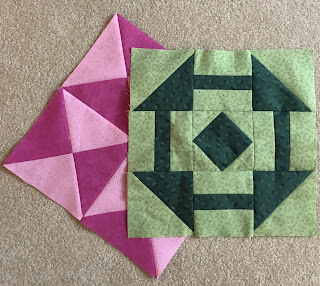 To learn more about Block #1 - January...Green and the instructions for the block are here.