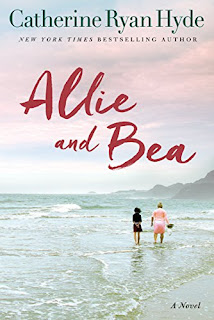 Allie and Bea form an unlikely alliance when Allie's parents are arrested for tax fraud and elederly Bea becomes homeless after falling for an IRS telephone scam. Allie is placed in a foster home after her parent's arrest and is soon in over her head when one of the girls steals the only things that Allie owns and Allie files a complaint against her. Allie leaves the home when her life is threatened and finds herself in an even dire situation. Bea packs up her belongings and lives in her van with her cat to stretch what little money she has left.  One night as Bea is driving down the highway Allie jumps in front of her van, climbs in  and tells Bea to "Drive!"

There is something so "right" in Hyde's stories, that feeling that there are good people in the world and everything is going to be okay. Allie and Bea are generations apart, but form a bond that enables them to survive without a home and little money. They each have their own concept of right and wrong and neither are willing to compromise on some issues and situations. Bea has forgotten what it is like to "live" for herself and Allie has lived a very privileged and sheltered life. There aren't always happy endings, but there are memories to be made and people to love. Hyde has a way of showing and not telling through her characters. Allie and Bea is one that you will want to share with your friends.

Catherine Ryan Hyde is the author of thirty-two published books. Her bestselling 1999 novel, Pay It Forward, adapted into a major Warner Bros. motion picture starring Kevin Spacey and Helen Hunt. Hyde is the founder and former president of the Pay It Forward Foundation. For more information http://www.catherineryanhyde.com.
Posted by Kathy Nester at Thursday, June 01, 2017