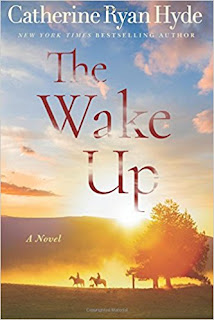 Aiden Delacorte is a forty-year-old rancher who has lost his ability to raise cattle for slaughter. His "wake up" comes when he hunts and kills a buck and he feels the buck's pain. Aiden begins to feel the fear and pain from animals around him and he is haunted by his past behavior. When he meets and falls in love with Gwen, his life is further complicated by her son, Milo. Milo has been abused by his father and acts out in his distrust of anyone. Aiden begins to recall his early years with his stepfather and draws on his memories to work with and get close to Milo.

Catharine Ryan Hyde's love for animals comes through clearly in her books. Aiden gives a foal to Milo with the hope that somehow Milo will be more responsible and learn to care for his horse. Aiden's stepfather did the same for him. Hyde's books are heartwarming stories filled with love, hope, and possibility. Realistic in her portrayal of characters who are "broken" and beyond repair, Aiden is investigated when Milo breaks his arm while throwing rocks at some rabbits on the ranch. I have reviewed a few of her other books (Allie and Bea is one of my favorites) and she continues to grow as a writer and I couldn't wait to read this one. I bumped it ahead of the books to be reviewed and I wasn't disappointed!


Catherine Ryan Hyde is the author of thirty-two published books. Her bestselling 1999 novel, Pay It Forward, adapted into a major Warner Bros. motion picture starring Kevin Spacey and Helen Hunt, made the American Library Association’s Best Books for Young Adults list and was translated into more than two dozen languages for distribution in more than thirty countries. Her novels Becoming Chloe and Jumpstart the World were included on the ALA’s Rainbow List; Jumpstart the World was also a finalist for two Lambda Literary Awards and won Rainbow Awards in two categories. The Language of Hoofbeats won a Rainbow Award. More than fifty of her short stories have been published in many journals, including the Antioch Review, Michigan Quarterly Review, the Virginia Quarterly Review, Ploughshares, Glimmer Train, and the Sun, and in the anthologies Santa Barbara Stories and California Shorts as well as the bestselling anthology Dog Is My Co-Pilot. Her short fiction received honorable mention in the Raymond Carver Short Story Contest, a second-place win for the Tobias Wolff Award, and nominations for Best American Short Stories, the O. Henry Award, and the Pushcart Prize. Three have also been cited in Best American Short Stories.

Hyde is the founder and former president of the Pay It Forward Foundation. As a professional public speaker, she has addressed the National Conference on Education, twice spoken at Cornell University, met with AmeriCorps members at the White House, and shared a dais with Bill Clinton.