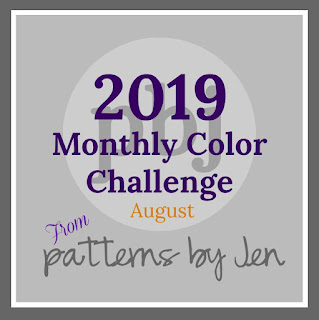 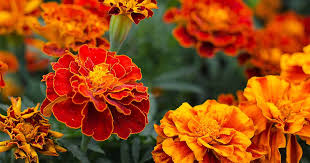 Before you even start this block...clean and oil your sewing machine! If you have been doing the monthly blocks and have been ignoring basic maintenance because you want to get sewing, now is the time. This plastic brush seems to be sold everywhere and is very handy to get into grooves and is washable. (My Granddaughters informed me that it is a mascara brush) 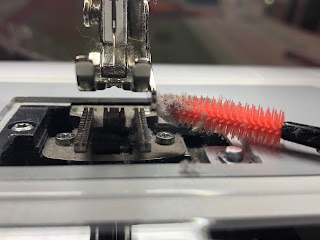 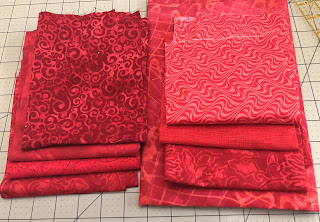 Choose your fabric. I pulled all of the red orange fabric from my stash to audition and decide what goes well together. 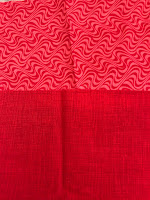 I decided on these two, I liked the contrast between the fabrics.

Let's talk tools! I use Best Press on all of my fabric; when ironing before I get started, ironing seams and after the block is completed. I found this spray bottle which gives a more even spray and the Best Press lasts longer. I paid 15.00 (2 for 25.00) at a Quilt Show, however, Amazon sells them much cheaper and in pretty designs (Amazon stylist sprayer). 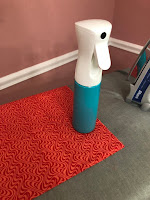 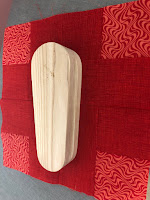 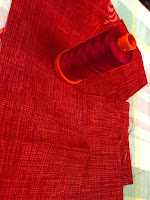 I love the Tailor's Clapper for keeping seams flat. If you would like to learn more about it, check out Suzy's Quilts.

Last, but not least...thread! I use Aurifil 50 wt thread exclusively because my sewing machines like it. I buy it on sale and have it in a variety of colors. Many quilters use white, off white or grey for their piecing thread. I took a class and made an intricate design only to have it look awful because I used a light thread and it was noticeable. When I mentioned it to the instructor that I was unhappy with the result, she suggested I use a marker to go over the light visible thread. That wall hanging was never completed. Choose a piecing thread by laying about 12 inches of the thread on your fabrics, it should disappear, unless you are doing decorative stitching.

This is an easy block to construct using Jen's pattern. 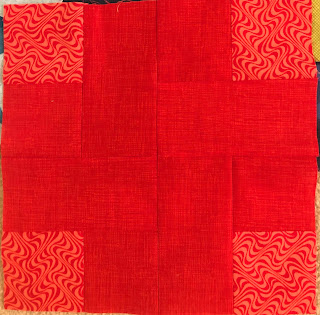 August's block plays well with the other blocks and Frankie approves! 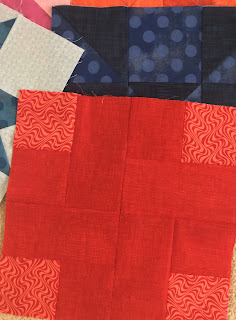 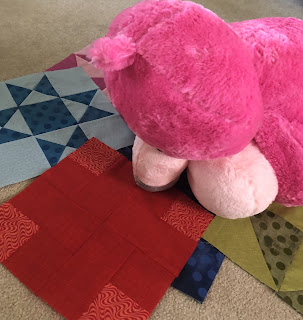 Check out the other Bloggers this month and leave a comment on their Blog!
Patterns by Jen
Quilts by Joanne
Pamela Quilts
The Quilted Diary 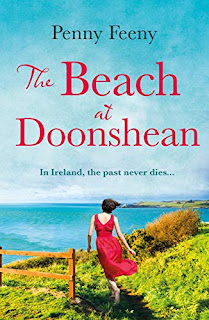 "They called it the secret beach" a secluded, not well-known beach in Ireland. Will stands on the ledge above the beach searching for his family when he hears the cries of a child and he can't tell if they are cries of excitement or fear. He sees a little boy lose his footing and topple into the water. Without hesitation, Will runs into the freezing ocean and only one person survives the water on that day.
It's now thirty years later and the story fast forwards to that same beach and town in Ireland. The two families whose lives were entangled on that day come together seeking closure and answers to their questions. Has Matt, the little boy saved from that ocean on that fateful day wasted his life seeking something that seems to evade him?
The story is a good one and is presented on many levels, how the past affects all of the people in both families. It fell a little short on the ending and I wanted more character development because of the many story lines, however, I thoroughly enjoyed the book. Feeny does an excellent job describing the countryside and beach  in Ireland. Doonshean is a townland situated in the western County Kerry,  Ireland.
I received an ecopy for a review.
Penny Feeny has lived and worked in Cambridge, London and Rome. Since settling in Liverpool with her husband many years ago, she has been a copywriter, editor and radio presenter and brought up five children. Her short fiction has been widely published and broadcast and won several awards. Her first novel, That Summer in Ischia, was Amazon UK's best selling title in the summer of 2011. 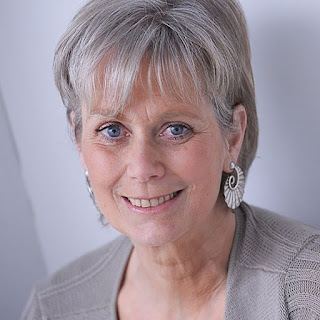 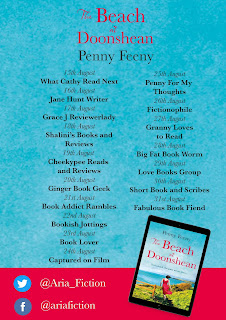 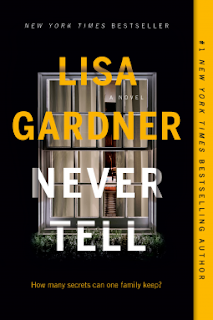 If you are waiting to purchase the paperback edition, it's coming ---publication date August 6, 2019!

In this 10th book in the series, D.D. Warren and Flora Dane investigate an unbelievable case. Evie returns home and the first thing she notices is the silence until she realizes that she should have noticed the smell. Evie flashes back to sixteen years ago when there was a similar smell...blood...dark, viscous, and everywhere. It can't be happening again thinks Evie until she sees the gun, removes it from her husband's hand and starts shooting at his computer. D.D. finds it unbelievable that Evie is once again a suspect in a murder investigation. When Flora realizes that she recognizes Conrad, Evie's husband, the murder takes on a new significance. Flora is drawn into her past memories of her abduction and torture at the hands of Jacob Ness. Is Evie innocent and has a penchant for being in the wrong place two times and accused of murder? When three houses burn, D.D. is convinced that someone is looking for something directly related to her case. Flora is determined to help D.D. find the arsonist and identify the murderer.

Gardner writes a thriller that is very hard to put down and yet I didn't want it to end. I thoroughly enjoyed this story that pits good against evil. There are enough clues to keep me guessing even though I wasn't absolutely sure until the end.

Lisa Gardner, a #1 New York Times bestselling thriller novelist, began her career in food service, but after catching her hair on fire numerous times, she took the hint and focused on writing instead. A self-described research junkie, she has transformed her interest in police procedure and criminal minds into a streak of internationally acclaimed novels, published across 30 countries. She’s also had four books become TV movies (At the Midnight Hour; The Perfect Husband; The Survivors Club; Hide) and has made personal appearances on TruTV and CNN. For more information, check out her website. Lisa runs a contest...Kill a Friend, Maim a Buddy Contest

How To Be A Mermaid 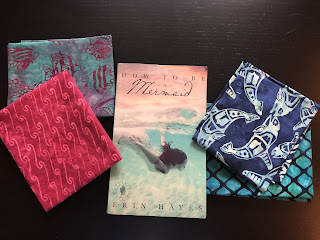 Tara has dreamed of being a mermaid her whole life. When an opportunity arises for her to be a mermaid and tour aquariums for a year, Tara convinces her mother to let her postpone college life. Tara is drawn to the sea life at the aquarium and distinctly hears a dolphin cry for help and for his mother. While trying to help Kai, a dolphin, she meets a gorgeous merman, Finn, and is faced with conflicting emotions and difficult decisions.

I received this book with 4 gorgeous fat quarters of fabric as part of an exchange for an IG book and fabric swap #quiltersbookpassport. It was an enjoyable read as an escape from the heat in PA this week. At 212 pages it was a very quick romance and fantasy book. Since the most intense part of the book is Tara and Finn kissing, it would be okay for a preteen who loves mermaids.

She lives in San Francisco with her husband and a giant cat, along with too many Sailor Moon figurines and pieces of art she brought back from her travels. When she’s not writing, well, she’s planning her next big trip or watching sci-fi movies.


I used one of the fat quarters as a lining in this boxy zippered pouch, free pattern tutorial from Crafty Gemini at https://www.youtube.com/watch?v=0BruF6Hk9NU 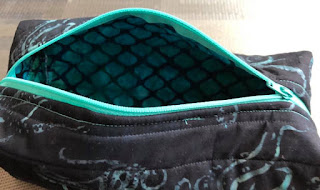 Now I have to choose 4 equally appropriate fat quarters to send with the book to the next name on teh list!

The vibrant colors of this plant are amazing,  Aqua is my favorite color! 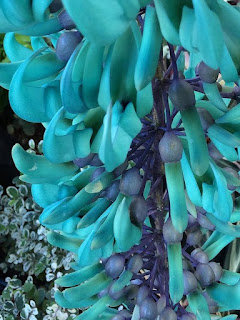 I pulled 4 favorites and paired them. Batiks or Grunge? 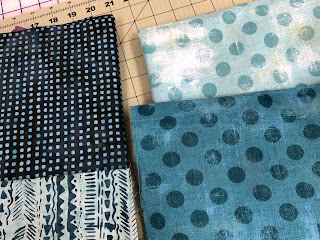 The colors never seem to photograph as vibrant as they are in person. You can find the block for July here. Jen has clear instructions and an easy way to make these flying geese sections. My colors are reversed from Jen's pattern. 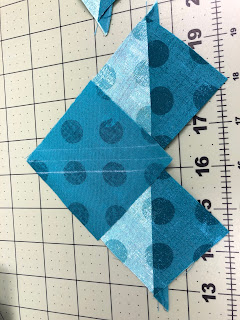 There is very little waste, make sure you trim your sections to the given dimensions. 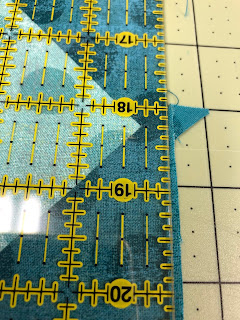 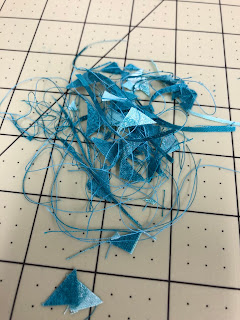 Remember your scant 1/4 inch seams. On my Bernina, I move my needle one position to the right. 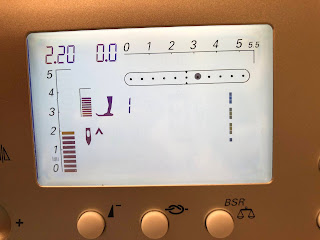 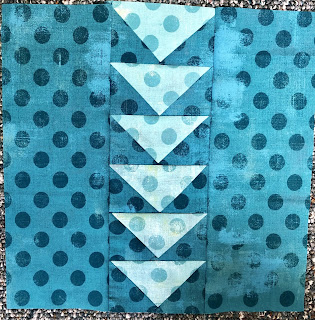 I love how this block has turned out! 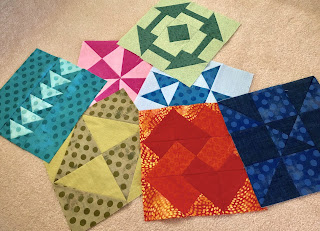 Frankie can't decide which is her favorite block! 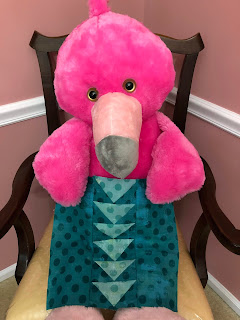 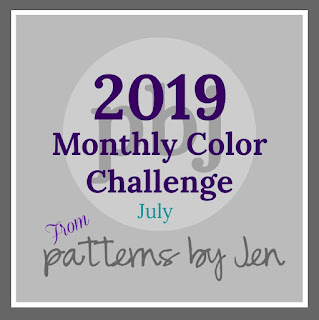