The Island of Worthy Boys 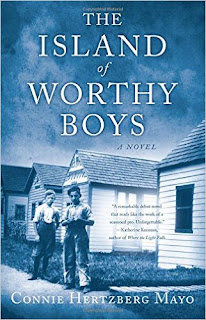 Charles Wheeler and Aidan Sullivan, an unlikely duo, are trying to survive living on the streets of Boston in the late 1880s. Charles has been living on his own for the last two years since his mother died and Aidan's mother has a difficult time staying sober enough to take care of him and his sister. Aidan begs Charles to teach him the art of rolling drunks in order to get more money. One night their joint venture goes awry and a man is stabbed. Fearing arrest Charles enlists the help of a prostitute to escape the city. Before they know it, the two boys are on a boat, pretending to be brothers, heading for the Boston Asylum and Farm School for Indigent Boys. A warm bed, cooked meals, classes and structured activities...all the boys have to do is follow the rules, can they start over and begin a new life or is a return to the life on the streets their fate?

Historical fiction at its best, Mayo transports us to Boston to the sights, sounds and smells of that time. While the story is fiction, the Boston Farm School did exist and the Superintendent, his wife and child were real people. Mayo brings them alive and gives them depth which enriches the story. While the Boston Farm School existed as an anamoly of the times, the reality of the hardships experienced by Charles and Aidan and their instinct for survival held me until the end. One of the things I loved about the story was the fact that Mayo wrapped it up beautifully. The measure of a good book is one that leaves me wanting more and sorry when it ends.

I received an electronic copy of this book from NetGalley and BookSparks for a review.

Connie Hertzberg Mayo finally felt old enough in her forties that she thought she had something to say in a novel. She lives in Massachusetts with her husband, two children, two cats and her heirloom-tomato garden.
Posted by Kathy Nester at Friday, December 04, 2015