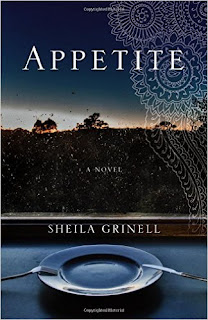 When Jenn Adler, an only child, returns home from a year in India, she surprises her parents with her engagement to a young guru from Bangalore. Even though her parent's marriage has stalemated, they join forces to dissuade Jenn from marrying Arun. Maggie and Paul for different reasons are convinced that the upcoming marriage is a huge mistake and are having a difficult time getting to know Arun and understanding their daughter's attraction and love for him. Maggie has accepted her second class status to Paul's work and passion and she is worried that Jenn may be following in her footsteps. Paul consumed by the belief that he is on the brink of a breakthrough discovery, feels threatened by the reassignment of an employee and questions about his research. Jenn and Arun's future plans cause both parents to question their commitment to each other, their future and their happiness.

Grinell drew me right in with her opening sentence. "There are two kinds of people in this world, Maggie Adler thought, those who eat when anxious and those who can't." Any mother who has a daughter will be able to relate to Maggie's dilemma, should she support her daughter in her choices or  does she have an obligation to speak when she feels her daughter is making a mistake? Maggie re-examines her life and explores options for change. Grinell does an excellent job of bringing her characters to life, even though Paul isn't very likable. My only hesitation at all with the book (choosing 4 stars versus 5) is that I wanted retribution and some enlightenment for Paul. Definitely a worthwhile read and one that will appeal to baby boomers as well as millennials; the age-old conflict of idealist youth and the quest to better the world versus the disillusionment of justifying choices already lived.

I received an Advanced Reader Copy of this book from BookSparks for a review.

Toward the end of her forty-year career as a creator of science museums, Sheila Grinell began to write fiction. Appetite is her debut novel. Born in a taxi in Manhattan, she studied at the Bronx High School of Science, Harvard University, and the University of California, Berkeley. She lives in Phoenix with her husband and dog. To learn more, visit sheilagrinell.com.