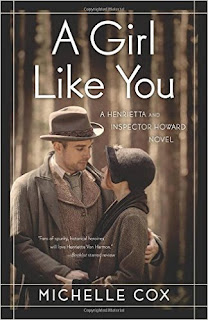 It's January 1935 and Henrietta Von Harmon is the house twenty-six girl and her job is to not only keep score but to encourage the patrons to keep drinking and playing as the night wears on. Mr. Hennessey, the Poor Pete's owner has become a surrogate father to her since her father committed suicide and left her mother with eight mouths to feed. The bar is going through a dry spell and tips aren't what they once were when Polly, her friend, persuades Henrietta to work as a taxi dancer at the Promenade. In an effort to deceive her mother, Henrietta tells her that she has a job working the night shift at the electrics. Henrietta quickly discovers that the dancing isn't as difficult as she thought and she actually enjoys dancing with men for money. All that changes abruptly when a murder is committed and the mysterious stranger she danced with turns out to be a police Inspector. Henrietta is quickly drawn into the Chicago crime world of drugs, prostitution, and murder.

I was pulled into this story from the very first page of this historical fiction novel. The poverty and hopelessness of the 1930s in Chicago are portrayed in vivid detail through the lives of Henrietta and her family. Despite the horrors of the underworld and the reality of the choices made to survive, Henrietta embodies hope for the future. I thoroughly enjoyed this book and look forward to Cox's next novel.

I received an Advanced Reader Copy from NetGalley and BookSparks for a review.

Michelle Cox has a B.A. in English Literature from Mundelein College, Chicago. She is a writer of historical women's fiction but has also known to dash off a mystery or two. While her heart might lie in the eighteenth century with Elizabeth Bennet and Mr. Darcy or in the crooked streets of Little Dorrit's London, she tends to write of a slightly more recent age, a time closer to the World Wars, when all was not yet lost and the last roses of summer were first coming in bloom. Ms. Cox lives with her husband and three children in the Chicago suburbs. This is her first novel.

Thank you for this great review, Kathy! So glad you enjoyed it!