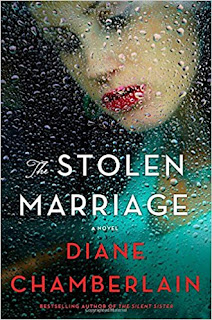 It's 1944 and Tess DeMello has her life planned. She is engaged to marry her first and only love when her doctor fiancé volunteers to go to Chicago to help out during an infantile paralysis epidemic. Tess has a one-night stand when Vincent extends his stay in Chicago and she soon realizes she is pregnant. Filled with shame and having nowhere to turn, she agrees to a loveless marriage to the stranger who is the father of her child. When Tess travels from Baltimore, Marland to Hickory, North Carolina, she discovers that her new husband has even more secrets than she does and isn't the man he seems to be. Tess is bored in her new role as a wife and has a difficult time adapting to her mother-in-law's expectations. She yearns to be reunited with her family and to confess all to Vincent. Would he have forgiven her? Will Henry grow to love her and his mother and sister accept her?

Chamberlain is a master at writing historical suspenseful fiction. Her research must be extensive to transport the reader to a time and place so successfully. Fans of Jodi Picoult and Lisa Scottoline will enjoy her stories. I love a book that takes a social issue and presents it in a way that causes me to question my beliefs on that issue. What do I think, what would I do? 73 years later and there are probably still places in the U.S. where someone like Tess or Henry would encounter the same prejudices and societal expectations. I enjoyed and was captivated by this story and recommend it for Book Clubs to consider. There are many discussion points and topics to be debated.


I received and ecopy for a review.


Diane Chamberlain is the New York Times, USA Today and Sunday Times bestselling author of 24 novels published in more than twenty languages. Influenced by her former career as a social worker and psychotherapist, she writes suspenseful stories that touch both heart and mind.