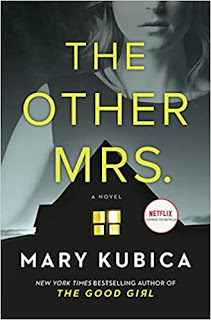 Sadie and Will Foust have inherited a house on a tiny coastal island in Maine. Will's sister committed suicide and left him her house and teenage daughter. Moving is a culture shock for Sadie and her two sons, especially living with sixteen year old, Imogene. When a neighbor is murdered and the investigating officer confronts Sadie as to where she and Will were on the night in question, Sadie begins to question all of the people in her life including her son and husband. Someone is lying and Sadie begins to question her own sanity.

I love psychological thrillers and this one is no exception. Kubica weaves a wicked tale of evil and manipulation. Told in alternating voices, the reader is left to guess as to how and whom those voices belong to. I read this book in one day while self-isolating during the coronavirus pandemic. It is great escapism and engrossing enough to forget everything else. Netflix has made a deal for The Other Mrs. Details at https://deadline.com/2019/03/netflix-the-other-mrs-movie-deal-mary-kubica-1202579365/

Mary Kubica Mary Kubica is the New York Times and USA Today bestselling author of five novels. A former high school history teacher, Mary holds a Bachelor of Arts degree from Miami University in Oxford, Ohio, in History and American Literature. She lives outside of Chicago with her husband and two children. Her first novel THE GOOD GIRL was an Indie Next pick in August of 2014, received a Strand Critics Nomination for Best First Novel and was a nominee in the Goodreads Choice Awards in Debut Goodreads Author and in Mystery & Thriller for 2014. Mary’s novels have been translated into over thirty languages and have sold over two million copies worldwide. For more info, https://marykubica.com.